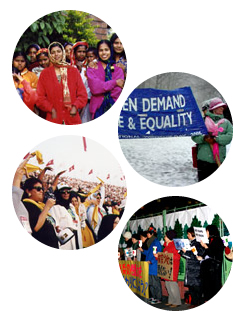 The 20th Century of continued wars and violence has passed. Yet we are facing no smaller challenges of violence and injustice today. Transnational feminist movements have been challenging social structures that lead to violence and suppression. Adopting feminist perspective that links gender, North-South relations and the environment, the AJWRC works to end all forms of violence and discrimination against women, toward democratic Japanese society based on respect for human rights and gender equality, and toward a fair and sustainable global society.

In order to end all forms of gender-based violence, including sexual violence under armed conflicts and around military bases, trafficking and sexual exploitation, domestic violence, and sexual harassment, we address gender biases and multiple discriminations, challenging the conventional concept of peace and security.

Alternative Politics and Empowerment of Women

Toward an alternative politics based on human rights and gender equality, we examine legal and political institutions, history, education, and technologies through a feminist lens, and promote empowerment and networking of women.

To achieve these goals, AJWRC works in the following three program areas:

For details of the programs, see PROGRAMS
For the record of the past activities, see PAST ACTIVITIES