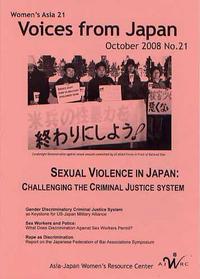 Sex Crimes in the Japanese Judicial System: the Response from Police and Prosecutors
a dialogue between Mami Nakano and Tomoe Yatagawa

Documents Withheld on Abandonment of Jurisdiction in Cases Involving US Military

Sex Workers and Police: What Does Discrimination Permit? by Nozomi Mizushi

What Types of Support are Needed for Victims of Rape? by Masayo Niwa