【Voices from Japan】No.27 Women in Okinawa: Resisting Colonialism and Militarism 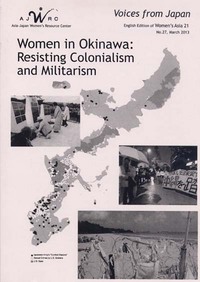 “Women and Military” from Okinawa’s Perspectives;
Comfort Women and “Mass Suicides” in Zamamison
by Harumi Miyagi

Rage Over Yet Another Case of Sexual Violence by U.S. Soldiers in Okinawa
by Hisako Motoyama

What the ‘Grand Narrative’ Leaves Out:
The Stories of Okinawan Women who Married American Men and Immigrated to the U.S.
by Wesley Ueunten

Abe Wants to Revise the 1993 Official Apology over “Comfort Women”