【Voices from Japan】No.30 New Immigration Policies of Japan and Their Impact on Women 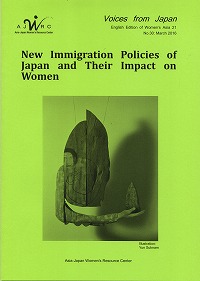 FEATURE:New Immigration Policies of Japan and Their Impact on Women

Immigration Control Act Revision Proposal:
The Problem with “Reinforcement of Countermeasures against those Staying in Japan by Wrongful Means” and the Establishment of “Care Work” as a Status of Residence
By Yuki Maruyama

Students’ Protests in Front of the Houses of Parliament – SEALDs’ Activities

A Recent Movement Calling for an “Anti-Discrimination Bill”